Chapter 16 - A nailed on defence

So, let us summarise. If we follow through from Stephen Ward we can see that he was, most likely, an MI5 operative with ties to the intelligence agency boss, Roger Hollis, and who, if not an actual Monarch mind-controller, was extremely gifted at persuading women to work on his behalf. Think back to Chrissie’s claim that Ward had full control of her mind. 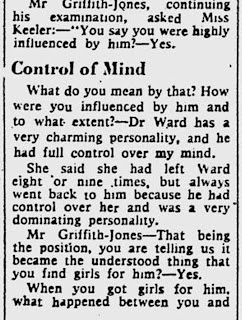 In addition he was connected to an international sex ring that controlled a wealth of dynamite blackmail material. Ward’s blackmail portfolio was passed on to the flamboyant celebrity lawyer, David Jacobs.

Possibly of further significance, or equally just pure coincidence, is the fact that the actor Laurence Harvey – the original star of the mind-control movie Manchurian Candidate – was another client of Jacobs.

As were the parents of an actual Manchurian candidate: Ruth Ellis. Just why would the impoverished parents of a convicted murderer need to employ the services of the celebrity lawyer whose other clients included John Vassall, Diana Dors and Stephen Ward unless they were all bound together inextricably by shared secrets?

But perhaps Jacobs’s most famous client was Brian Epstein and the Beatles. Indeed, Jacobs’s Hove residence was the, not so glamorous, location for Ringo Starr’s honeymoon following his first wedding in 1965.

Jacobs place in the pantheon of Beatle fame, however, is preserved because of his role in the disastrous Seltaeb (Beatles backwards) deal through which Epstein and Jacobs somehow connived to give away the Beatles’ merchandising rights for next to nothing.

The lucky recipient of this enormous cash-cow was a Kings Road dandy by the name of Nicky Byrne who found himself in the fortuitous position of acquiring a deal giving him a 90/10 split, in his favour, of the royalty proceeds. Now this was a truly monumental faux-pas as unscrupulous manufacturers had quickly discovered that you could sell absolutely anything that was Beatle branded: For Byrne it was a literal licence to print money.

History, however, has been, surprisingly, generous to Epstein and Jacobs over this matter, sighting that they could not possibly have foreseen just how lucrative this fledgling merchandise business would become. Nevertheless, it troubles me slightly that the beneficiary of this massive windfall should be an already wealthy young member of the burgeoning Chelsea set.

Not just any old member of the Chelsea set either but a motor-racing-driver who had been previously in the employ of Peter Rachman in one of his nightclub ventures! 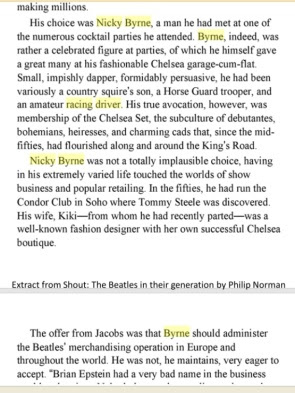 The book (Shout: The Beatles in their generation by Philip Norman) names the club in question as being the Condor Club but it was, in fact, the El Condor Club and, as just mentioned, it was owned, at the time, by Peter Rachman.


Jacobs died in 1968; dangling from a length of silk-cord tied to a beam in his garage, elegant even in death; seemingly yet another suicide victim. Numerous theories abound as to why, or indeed if, he committed suicide, but perhaps the most telling aside came from the actress Suzanna Leigh who, moments after hearing of Jacobs death, received an invitation to lunch in the post from the lawyer. Clearly if he did top himself it wasn’t a hugely premeditated event. 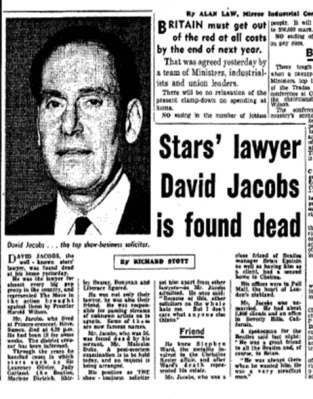 Rumours also abound that our old friends the Kray twins offed Jacobs for declining their tempting offer for him to mount their defence against, subsequently proven, murder charges. I know not if these rumours are true, however, perhaps another interesting defence case he took shortly before his ‘suicide’ is worth resurrecting?

An article appeared in the Daily Mail on Saturday, August 3rd, 1968 concerning one Joseph de Havilland, a Hungarian painter and decorator, who had been discovered on Hampstead Heath crucified on a cross.

My interest was sparked by the tantalising headline ‘Man on a cross ‘black magic’’ but further investigation reveals some other intriguing nuggets and curios.

Firstly, why would our ‘celebrity lawyer’ bother taking a somewhat low-brow and trite case as this?

Well it appears our man Jacobs was himself interrogated by police on this very matter; quite on what grounds is unclear, however, the plod clearly thought of Jacobs as being someone of interest and this, apparently, was enough to pique his professional interest.
Secondly, the men Jacobs had been defending were barred, by law, from using as their defence the fact that de Havilland had asked to be nailed to the cross.

Under British law, a victim cannot consent to be injured: unless the activity which causes the injury might be considered ‘socially useful’.

What counts as ‘socially useful’ in the eyes of the law (e.g. boxing) and what doesn’t (e.g. consensual homosexual sadomasochism) remains a hotly contested issue?

Bizarre, and extreme, as that is the case for the prosecution makes for illuminating reading. 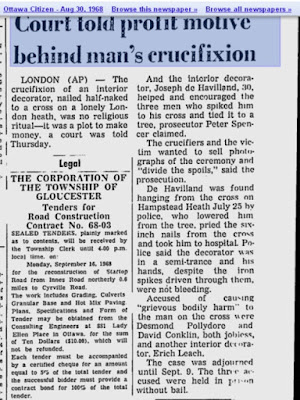 Isn’t that interesting? A man in a ‘semi-trance’ with six-inch nails hammered into his bloodless hands has done so in order that photographs of his ordeal could be taken and sold for a profit.

Interesting also that the man charged with defending the assailants should be a man who has been assigned legal responsibility for a large portfolio of sexual blackmail material and who implies, in court, that the crucifixion was part of some, unspecified, ‘black magic’.

So, what to make of this ‘defence’? We do not know what de Havilland’s motives for being crucified were; however, he seems to have been taking part in some sort of occult ritual. As a defence,  playing the black magic card seems a high-risk strategy; certainly not one designed to endear you to either judge or jury.

It appears that Mr Jacobs, legally denied the opportunity to tell the truth, has concocted the black magic tale to either divert attention away from the intention to photograph and make money from this scheme, or to obscure the sadomasochistic, homosexual aspect of the case.

The latter supposition certainly seems the more likely, particularly in light of the following.

The website from which I gleaned a lot of this information contends that shortly after Jacobs death he left ‘behind almost indecipherable notes. Notes which led to police questioning of several gentlemen, including well-known public figures, about parties which had taken place at country estates and flats across England.
Information about the precise nature of these parties has never been made publicly available.’

However, we can safely deduce that the country estate mentioned is most likely Cliveden, home of the Astor family and the birthplace of the Profumo scandal, whilst we know that Peter Rachman specialised in leasing flats to prostitutes and parties took place at locations as diverse as Lord Boothby’s home, DJ Alan ‘Fluff’ Freeman’s flat and at the now infamous Dolphin Square.

So, could his death actually be connected with materials he had in his possession that he had accumulated over his career?

This article claims that some of the material – sketches by Stephen Ward – landed up in the hands of one of Jacobs’s clerks. Rather than dispose of these, as instructed, it appears the clerk took them to an art dealer. Curiously, the article also talks of a nightclub called the Paint Box which offered its clientele the opportunity to sit and ogle a nude – you could draw them too, apparently – that was run by a lady called Adele de Havilland.

Could she have been a relation of our fan of crucifixion Joseph de Havilland? Well, whilst it is, of course possible, I doubt that this coincidence will ever fly.
Pathe has a wonderful video of the Paint Box.

The Paint Box video suggests that the club was, in fact, run by Tommy Yeardye, who was a former boyfriend of Diana Dors. Given that the real purpose of the Paint Box was to bypass the laws around nude floorshows – in much the same manner as the owners of Murray’s Cabaret Club utilised – it could well be that this was a front venue for Ward to recruit potential mind-control victims.

Yeardye’s daughter, Tamara, who now runs the Jimmy Choo shoe enterprise, married into the powerful Mellon family which has, it seems, connections to the CIA LSD operations and to whom David Bruce, the US Ambassador to the UK at the time of the Profumo crisis, had married into. Yet more circles within circles.

With David Jacobs dead the ultimate question remains, where did Ward’s ‘evidence’ go?

Ward was connected to Dr Richard Asher who, and I have first-hand experience of this, was involved in conducting experiments on using LSD for sexual and mental conditioning on patients being supplied to him by Ward. In 1956 Asher had written an article for the British Medical Journal entitled Respectable Hypnosis extolling the virtues of hypnosis in medicine.

Asher worked in partnership with Dr Emanuel Miller who has links to Tavistock as a former leader of the Tavistock Children’s Department. Miller had previously, in 1927, opened the East London Child Guidance Clinic. I wonder now if he was involved in conditioning these children.

The third partner was Sir Raphael Cilento, a man with seeming fascist tendencies and more than a passing interest in eugenics; something which always raises alarm bells.

Eugenics is a belief in the ability to improve the genetic quality of human beings, something the Nazi’s bought heavily into, and one wonders how it was that all of the above had children that had highly successful careers in show-business. Was it coincidence, opportunity, breeding or a payoff for services rendered?

Likewise, is it pure coincidence that Richard Asher, Stephen Ward and Anthony Blunt all had fathers who were Anglican ministers? Roger Hollis, the former Director General of MI5, was the son of a Bishop. Despite this ecclesiastical upbringing Hollis was apparently denied a Christian burial and whose remains, as stated here, are actually hidden behind the wall of a church. This unmarked resting place, it is claimed, denotes the invisible mark of a traitor’s burial. Founder of the Process Church, Robert de Grimston, also came from a long line of clergymen, although his father was a humble shipping clerk. Fathers who are religious leaders are common amongst children who are mind-control victims.

As previously mentioned de Grimston was of Plantagenet stock; as are Richard Asher’s offspring thanks to their mother’s lineage.

All of which means we are now moving into the direction of what I believe this is all about, none of which I can prove of course; speculation city from here on in folks, but if you’ve stayed with me this far then hopefully you will continue to indulge me.

My own theory here is that all this was part of a possible coup for the Crown of England.

The Stuarts are the obvious choice; they are the ones who lost the Crown to the current Royals and they claim to have an Arthurian ancestry. I have a reason to say this; via ‘a reliable source’ I’ve learned there have been four possible attempts to take the Crown in the last hundred years, one was foiled by WWII and the same person involved tried again after the war. Did Stephen Ward stumble upon this?

That would have got him killed, pronto. But as ‘they’ couldn't know who else was involved or what they knew they did it in that very public and messy way to let those people know to shut up, or die.

Yes, I think Ward got too close.

Is it ironic accident, or by pure design, that the Stuarts will regain a grasp on the monarchy when Prince William becomes King? Whatever; back in the sixties that particular piece of monarchical genetic programming had yet to be engineered and the search was far cruder.

Search for what I hear you cry. For the ledgers of course! Don’t worry, all will be revealed I promise.