I suspect that all of this seems more than a tad unbelievable but, trust me when I tell you this, nothing is real. John Lennon was right when he wrote those lyrics for Strawberry Fields Forever; ‘Living is easy with eyes closed.

Misunderstanding all you see’. Strawberry Field was a children’s care home as well, I wonder what Lennon knew?

Everything you have ever been taught about this world is bullshit, it is fiction. However, all I can do is connect the dots and let you form your own opinion. Circles within circles my friend, they’re all there.

I mentioned earlier seeing Ward at Leonard Cheshire’s place, well, let me tell you about Cheshire and his wife Sue Ryder. Cheshire was a war hero; a former air force pilot who won the Victoria Cross for his wartime exploits with the famous Dambusters and was someone of whom I was in absolute awe at the time.

After the war he opened a care home for the disabled. Incidentally, one of the founders was Lord Denning, the man who would write the cover-up report for the government after the Profumo scandal denying any security leaks and blaming everything on Stephen Ward. Needless to say that was a whitewash!

Sue Ryder was a member of Churchill’s wartime Special Operations Executive (SOE) and may have been involved with operations to smuggle Nazis into Britain under the guise of them being refugees. The Ryder homes have also been rumoured to have employed illegal immigrants as nurses and of covering this up by using false identities.

Incidentally, should you be so minded as to submit a Freedom of Information request to find out the official results of this research you will be informed that to reveal this information is not in the public interest. The purpose, however, of the Tavistock involvement was, purportedly, to provide the inmates with a voice. It is ironic in the extreme then, that this voice is deemed as not being worthy enough for the public to hear. 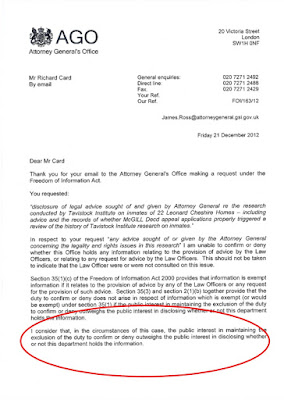 Another function of the Tavistock Institute was to attend to the psychiatric well-being of one Rudolf Hess post his close-up encounter with a Scottish field in 1941. Many and varied were the rumoured purposes of the Deputy Fuhrer’s Caledonian sojourn, the most frequently recounted being that he was there to negotiate a peace settlement behind Churchill’s back (I know the real reason and we will get to that in due course).

In fact when Hess flew to Britain he immediately requested a meeting with the Duke of Hamilton. Hamilton was a member of the Cliveden Set - named after Lord Astor’s Buckinghamshire pile where Christine Keeler was ‘accidentally’ seen by John Profumo swimming in the nude - which was formed by a group of toff’s that wished to negotiate a peace deal with Hitler’s Nazis. What prompted this proposal – besides a shared ideology with the Fuhrer – was the realisation that should the noise of Nazi Jackboots ever be heard marching on British pavements it would sound the death knell for their cosy inbred plutocracy.

Another member of this, so-called, elite who desired the same outcome was the Duke of Bedford. Bedford was also known as the Marquess of Tavistock and the grateful Tavistock institute had adopted his name after he had kindly donated a building to them. An act he initiated for purely philanthropic purposes I am sure!

Given Leonard Cheshire’s wartime activities and Sue Ryder’s rumoured involvement with Nazi refugees, not to mention the fake identities of patients and the Tavistock involvement, could there have been a conspiracy to conceal a programme that experimented on the patients in these care homes for mind-control purposes? Furthermore, could they have needed these patients to supplement the shortage of subjects left by the gradual demise of the original ‘guinea-pigs’; the wounded soldiers, after the end of the war?

If you are having problems believing these allegations of mind-control then consider this nugget from the author Aldous Huxley:

“There will be, in the next generation or so, a pharmacological method of making people love their servitude, and producing dictatorship without tears, so to speak, producing a kind of painless concentration camp for entire societies, so that people will in fact have their liberties taken away from them, but will rather enjoy it, because they will be distracted from any desire to rebel by propaganda or brainwashing, or brainwashing enhanced by pharmacological methods. And this seems to be the final revolution.”
Aldous Huxley, Tavistock Group, California Medical School, 1961.

The Contemporary Youth Club in Walthamstow in east London was run by a woman called Rose Finesilver. Rose, like Peter Rachman, was a Jewish refugee from Poland and, it has been rumoured, was an early handler of the Kray twins. Whatever the truth of that the Contemporary provided the local youth of Walthamstow with an oasis of calm and a haven from the streets. At least, that was the external appearance.

In reality Rose was keeping an eagle eye out for any vulnerable waifs and strays that may stumble upon her refuge. Rather than providing hospitality and nurture these poor unfortunates would land up in the dubious care of Ronnie and Reggie who would then pimp them out amongst their coterie of perverts and lowlifes.

About six miles west from Walthamstow is Muswell Hill where, in January 1967, 17 year old Bernard Oliver, a young, vulnerable man with learning difficulties disappeared. His dismembered body would later be discovered in sleepy, rural Suffolk, in a suitcase, in eight pieces.

The prime suspects for this brutal murder were two doctors who would soon after emigrate to Australia, with one later committing suicide, though no arrests were ever made. However, back in London and a couple miles south of Muswell Hill on the Holloway Road events would conspire sufficiently so that the gay record producer Joe Meek became convinced that he would soon be implicated in the Oliver murder investigation after the Metropolitan Police said they would be interviewing all known homosexual men in the city.

What sparked Meek’s fear is unclear but, following a conviction for ‘importuning for immoral purposes’ in a public toilet in 1963 and having been fined £15, he had become a frequent victim of blackmail attempts. Meek is also rumoured to have attended parties held at the DJ Alan ‘Fluff’ Freeman’s flat in the East End where amongst the entertainment supplied were young boys from the Kray’s care home syndicate.

Despite clearly being innocent of any involvement in Oliver’s murder Meek blew his brains out with a shotgun, having just killed his landlady, less than a month after Oliver went missing.

The Krays and blackmail: frequent bedfellows.

Rose Finesilver also had a reputation for liking children and teenagers to be used as pawns to get politicians and other notables into positions from whence they could be blackmailed. So I have heard, the rotund, and now very dead, politician Cyril Smith went to visit Rose when he found himself at the centre of a blackmail plot concerning his penchant for buggering young boys. The story goes that Rose admired his honesty and his crocodile tears so much that she arranged for the Krays to ‘sort’ the situation. True or not, I do not know, but given what has subsequently come to light about Smith I would err very much on the side of true.

Either way, any and all information from Rose and her Contemporary contemporaries found its way back to Mossad, the Israeli secret service.

Whilst trawling the old www I stumbled upon a photograph of Ronnie Kray and Lord Boothby at some posh do; could that be Rose Finesilver perched at the end looking very pleased with herself? 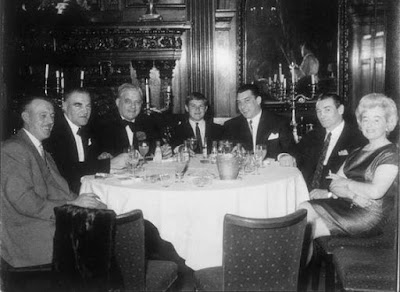 Another regular at the Contemporary was a guy by the name of Buttons, real name Peter Welsh. Now Buttons, back in the sixties, was the leader of the local Rockers – I was always a Mod myself – who had found himself a lucrative side-line as a bodyguard for Peter Rachman; or rather Rachman’s dwarf double. Buttons would go on to gain the distinction of being given permission to form the first chapter of the British Hells Angels; though one wonders if that can actually be considered an achievement?

Rachman’s connections to the Krays were many and numerous; not least due to their acquisition of Esmeralda’s Barn; a club and gambling den in Knightsbridge that enabled the twins to spread out their operations beyond their traditional East End manor. 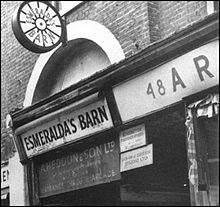 In fact Esmeralda’s had been opened originally by one Hod Dibben, and that opens up a whole new can of worms. But we are getting ahead of ourselves.

Another rumour attributed to old Rose Finesilver was that she had arranged for the shooting of the famous ex-boxer Freddie Mills over the non-payment of a debt. I don’t know if this is true or not, but Freddie, who was good friends with the Krays, did land up dead with a bullet lodged in his cranium.

This bullet wound though may well have been self-inflicted; one of the rumours that swirled around was that the police were closing in on Freddie as a suspect in the Jack the Stripper murders.

Remember the girl I told you about at the parties at Dolphin Square, Hannah Tailford? She was just one of a number of good-time-girls who landed up being strangled and dumped naked in various parts of west London. Now Freddie met his haymaker in July 1965 and as no more corpses washed up after that maybe the Old Bill’s* finest minds put two and two together and came up with five; who knows? However, if old Freddie did blow his own brains out himself then he at least had the good grace and manners to carefully place the rifle upright on the car floor and eject the spent cartridge after he had done so!

But Freddie was no murderer; how do I know? We will get to that but, suffice it to say, when it came to the time to read out Freddie’s will it turned out he was boracic lint**. Despite the nightclub, despite the TV appearances, despite the newspaper column and despite the many and numerous bouts, poor old Freddie didn’t have a pot to piss in. Just a mere £300 left. So where had it gone? Blackmail. Pure and simple.

*Old Bill: Slang expression for members of the police.
**Boracic lint: Cockney rhyming slang for skint, meaning to have no money.

The rumours had been doing the rounds for a while that Freddie had been having a gay affair with the singer Michael Holliday, who may well have been having a simultaneous gay affair with Ronnie Kray as well, and for sure Freddie and Michael were great mates. In 1963 Michael died of a drug overdose just hours after giving his last performance at Freddie’s nightclub and poor old Freddie was gutted. Whatever the truth about Freddie and Michael someone had something on Freddie and either he refused to pay up and paid the ultimate price or he took another way out.

Another link to both the Krays and to Jack the Stripper came in the form of one Cornelius Whitehead. Whitehead, who was jailed along with the Krays as an accessory to the murder of Jack ‘the hat’ McVitie in 1969, had been the pimp of a Welsh whore called Gwynneth Rees.

On 8 November 1963 Gwynneth was found dead near the River Thames. Once again, investigators felt Rees may have been a victim of Jack the Stripper due to her being found near the river, and because she had been strangled with a ligature and because several of her teeth were also missing.

You may be noticing a recurring death theme in these memoirs; funny that isn’t it? Prominent people + sex scandals + blackmail = death. Perhaps we should start at the beginning and work our way forward.