I’ve had reason to contact several people in these last few years and I know that a Belgian called Phillip Coppens – now dead, sadly - did a lot of the research that Dan Brown, he of the De Vinci Code fame, used in that book.

Coppens was one of the guys my pal Gary overheard at Heathrow airport talking about me. More interesting was that Coppens, and one of the men with him, Jack Sarfatti; a scientist from New York with connections to the Esalen Institute who was over to meet with Uri Geller, were overheard talking of the Holy Grail and two men that are both still highly revered in occult circles: Dr Stephen Ward and Tommy Cooper. “Strange things went on back then,” said Sarfatti talking about the Profumo scandal.

I knew Tommy Cooper, though not as well as I knew Ward, and I know both were part of a 2,000 year-old secret sect that for the last 1,500 years has been called ‘The Twelve Knights of Camelot.’

Cooper was a household name in the UK in the sixties and seventies who was famed for his comedy and magic act and large, ungraceful appearance.

scientist from New York with connections to the Esalen Institute who was over to meet with Uri Geller, were overheard talking of the Holy Grail and two men that are both still highly revered in occult circles: Dr Stephen Ward and Tommy Cooper. “Strange things went on back then,” said Sarfatti talking about the Profumo scandal.

It is likely that Stephen Ward met Cooper at the Windmill Theatre, though I do not know this for certain. The Windmill was famed for its nude reviews where scantily clad or naked women would appear on stage using the legal loophole that they would remain stationary at all times. In this sense the Windmill’s appeal was very similar to that of Murray’s Cabaret Club or the Paint Box.

Lots of comedians of the era appeared at the Windmill including ex Goon Club member, Michael Bentine. Bentine was an intriguing character who allows us to connect a lot of dots. Bentine was, like Felix de Wolfe, an RAF Intelligence Officer. In Bentine’s case he was transferred into MI9 after having been ‘accidentally’ injected with a vaccine containing a pure culture of typhoid. The vaccine left him in a coma for six weeks after which he was myopic and no longer suitable for flying duties. He also claimed that after this event he developed a psychic ability that meant he could predict if someone was about to die; if he saw a skull super-imposed over their faces, he then knew they would shortly perish.

Bentine appeared on television with Cooper as well as with the Felix de Wolfe represented Deryck Guyler. It would appear that there was a clear ploy to use showbiz personalities and theatrical agents in this conspiracy.

As an aside, I should bring your attention to this snippet from the Daily Mail which tells a tale of a cosy lunch at Cliveden involving Diana Dors, an unnamed gangster, and John Kennedy who was the agent for Tommy Steele – a huge star at the time – and a conversation about a manuscript for Ward’s autobiography. I never saw any manuscript but God only knows how explosive that would be should it ever surface, but my point in offering it is, of course, to demonstrate the extent of Ward’s excellent showbiz credentials.

Bentine and Ward were associates and in the book The Secret Worlds of Stephen Ward we find this claim:

Furthermore, in his 1984 book, The Doors of the Mind, Bentine had this to say about Stephen Ward: 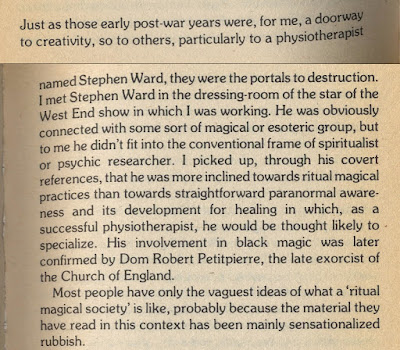 Dom Robert Petitpierre, incidentally, was the man who exorcised the Astor mansion after all the Profumo shenanigans.

The Grand Master of the Twelve Knights of Camelot was Bertrand Russell; he was one of only two who were very, very deeply psychic. Additionally Russell was also a Cambridge Apostle like Anthony Blunt and his handler Victor Rothschild.

Ward and Cooper were involved in black occult ceremonies.

I know this as they used me in one of their occult rituals; a 13 year-old virgin boy. They used thirteen 13 year-old girls too, all daughters of group members. This was a Grail ritual and it can only be done at the spring equinox. That ceremony was possibly the first time in 500 years they had all the right pieces in the right place; 13 thirteen-year old virgins and a ‘suitable’ boy.

The elite were involved in the breeding of ‘spares’ but it doesn’t seem to be quite the thing Ward’s lot were into, I think I would be aware of it if that was the case, after all, I was ‘suitable’ and must be of interest to them. They used me to breed with their daughters, the girls involved in that first ritual.

I was later told that none of the girls got pregnant, that my informant was aware of, anyway. Too young, probably.

Quite what made me suitable, I don’t know, but years later my father did our family-tree and succeeded in going back 2,300 years to find we were directly descended from Harald Fairhair, one of the greatest Vikings to ever have lived, 44 generations I think, and that we were very much related to all the Royal Houses of Europe, especially the Windsor’s.

Reading the Icelandic Sagas my father found we might be directly descended from the Archangel Gabriel, one of the first Twelve Gods, and it might have been this that old Tommy Cooper saw: he saw I had their genes in me, though from way back, so was ‘suitable’. There can be nothing else. Ward’s group revered life and never did abortions etc., so any ‘accidents’ during these rituals would be raised as part of the family, so everyone had to be ‘ok’.

Tommy Cooper and Ward used to talk the black occult all the time; Tommy was a member of some secret group. He wanted Ward to join but Ward was a bit dubious of some of the people in the group who seemingly wanted to cut corners and ‘go for it’ unhindered, something Ward didn’t agree with. I’m not actually sure if he was a full member, but he did help-out sometimes when he perceived it as necessary. He and Tommy used to sit in Ward’s flat and talk the occult for hours; oh, how I wish I could recall all of it, but I can’t, I probably wasn’t listening properly at the time thinking it was all childish rubbish!

It started when Tommy heard that Ward and the other doctors were using me in experiments and Ward had regularly been hypnotising me for various things. Tommy demanded to ‘use me’. Ward went as white as a sheet, but didn’t try to stop him as he was frightened of Tommy Cooper. After asking me nicely Tommy gained my permission.

Eventually, Tommy Cooper proclaimed me ‘suitable’. Going down to level-4 takes training, not only for the operator but for the subject too; you can severely hurt people doing it too fast. “You don’t bash people over the head with a sledgehammer”, said Ward. This training took a month or two, even with me.

What most people know of as hypnotism is merely ‘level one’. For those ‘in the know’ there are eleven more levels. Each level takes you a bit deeper each time, so, in the end you’re anywhere from 15 - 20 x deeper than level 1.

Eventually you’ll get to the ‘Root-Codes’. I think, though I don’t actually know, that it’s possible to change our DNA at level-12.

There were only two people in the world - as far as I am aware - that could go to level-12. They had literally driven people insane, and even killed a few, training to do it. The real problem was that their, let’s say, knowledge of spells, was limited. All those books burned in Egypt and during the Dark Ages were a deliberate attempt to hamper and reduce their knowledge of the spells, to drive them out from hiding in order to protect ‘the knowledge’ from destruction, at which point they could then be captured and used. They kept a cool head and that didn’t happen.

But this meant they had to rely on memory, which wasn’t good enough. But there must be copies somewhere. I think I know who the Grand Master was; I met him a few times without his hooded-cape. If it was him, he was a very brave and resourceful man; he was playing the game of a double-agent trying to find those copies of the spells. Something tells me the other level-12 man ‘committed suicide’ in 1969. There’s nobody who can do real magic today, a là Harry Potter/Lord of the Rings.

I doubt that we can suddenly change into a lizard, for example. We are made up of a certain number of cells, lizards have fewer cells, being smaller, so we would have to shed cells, cells that would have to die etc., and I don’t see this being feasible, but I do think they can alter the male sperm to slowly produce something else, something slightly different each time. I think it’s how we first evolved. I think I might have been used in just such rituals.

I was used in several occult rituals to help them ‘talk to God’, or as I’ve now deciphered, ‘talk to the Holy Grail’. I was lucky, it seems, these people were ‘nice’ people who revered life. I’ve been in contact with others in Britain who seem to have been used by ‘the other side’, the ‘dark side’, and they had horrific memories of abuse.

One trait psychic people have is that they tend to sleep during the day and work at night (or try to). Night-time is very quiet, they hear the voices easier and, when asleep, they have nightmares; during the day the natural noise of life helps cover these voices. Some, like Tommy Cooper, cover it with drink, another clue, or, when they became available in the ‘60s, with drugs. Tommy Cooper told me drink was the only thing that dulled the voices.

My mentor, Stephen Ward, was impotent, so couldn’t use sex either. This was why he liked to watch, he screwed in his mind instead! I gladly helped him with this as he knew lots of nice girls. He found a ‘quiet’ area of London (Marylebone, around Harley Street, south of Regents Park) and just ‘cat-napped’ at night.

Music seemed to be prevalent amongst the psychics I knew, music helps soothe the troubled mind (but not rap etc., which is based on the cadences and frequencies used in brainwashing, a disturbing development).