Way back at the beginning I said this; the Profumo affair was the biggest cover-up in global history, its vast tentacles extending way beyond the narrow confines of 1960s London. Its true scope and enormity would shock even the most ardent conspiracy theorist: it encompasses not just Stephen Ward, but all his girls and how he controlled them; it goes to the heart of the JFK assassination; it tells how the hippie movement was created as a tool of government; of how a non-existent serial killer was created; of phoney spies and royal conspiracies. All to protect the world’s oldest secret!

I doubt you believed me then, you may not believe me now, but let me just wrap this all up for you.

Like Peter Rachman, Stephen Ward was prepared to do whatever it took to get the job done. He hated the Royals as much as the Reds and was negotiating with the Russian Ivanov to get evidence on the Royals that would crush them forever. Evidence the Reds had found after the revolution.

Ivanov had helped move this Kompromat evidence from St. Petersburg and archive it in Moscow. He was also looking for a copy in England, files Rudolf Hess had brought with him on that flight of mystery he made in 1941. Roger Hollis, the one-time Director General of MI5, had spotted the files in the archives at the end of the war and had tried to find them again. They had been removed. As had other sensitive files. No record of their existence survived either.

Secrets so volatile they can never be revealed.

We in Ward’s team of Baker Street irregulars were told they were lists of all the communists in Britain, but in reality, and it took me years to work this out, we were actually looking for ledgers; genealogical charts; breeding charts, if you will, which would indicate which individuals, or families, the Establishment would consider exchanging bodily fluids with.

It is logical that Ward would try to get the Reds to give him new copies, thus saving a lot of time and trouble and risk. I think I know what he offered in payment, and, although atomic stuff, it was not atomic secrets, if you know what I mean! I better not mention what it actually was; you all think I’m mad anyway!

But at the time it was just a story; an amusing aside, I didn’t know then that Ward’s spy-team was actually looking for these ledgers.

And what of the modern state of mind-control? I don’t know if the current Harley Street mob still experiment on people and the LSD experiments have long since finished; they having finally realised that hallucinogens, and the subjects’ responses to hallucinogens, were not reliable and ergo not the way to go. The American CIA moved into projects such as Operation Often, purportedly designed to ‘explore the world of black magic’ and ‘harness the forces of darkness and challenge the concept that the inner reaches of the mind are beyond reach’, which all sounds depressingly familiar, does it not. I have been out of the loop a long time so I can only speculate on what they do now but my guess is that they use the alien thing.

Think about it, if somebody sees some strange object in the sky – films it even - performing fantastic aeronautical feats then we have become so trained by the years of government denial and Hollywood movies to automatically think that it can’t possibly be of this world.

That is mind-control in action, the very definition of ‘plausible deniability’; this craft performs staggering manoeuvres and moves at fantastic speeds therefore, it must be alien. The perfect cover story whilst the Americans perfect the Nazi technology they’ve been working on for over seventy years.

Except how come so many crash? If aliens really could fly billions of miles across the universe, or manipulate wormholes, then you would expect that they could master the relatively weak gravitational pull of this planet. Human technology on the other hand, especially of the experimental variety, that fucks up all the time.

What about alien abductions you may ask? Well some are clearly just nut jobs demanding attention or notoriety but some clearly believe their abductions to be true. Interestingly a lot of these recollections are only revealed when the subject is hypnotised. Perhaps these abductees are those of us with the ancient psychic gene that have been identified by the Establishment and are now being experimented upon. Not by aliens though, but by the mind-control technicians and these poor unfortunates are then implanted with memories of little green men with rectal probes so that the Establishment has the perfect cover story. Modern day mind-control in action.

The other ploy is the Project Fear operation. As you know these people control the media. Back in the day the Cliveden Set owned, almost exclusively, all the right-wing media. Nowadays it is no different: Murdoch’s News Corporation owns the Times and the Sun; the Barclay brothers own the Telegraph; Lord Rothermere owns the Daily Mail; Richard Desmond the Express. All right-wing and all peddling the self-same tales of impending doom and destruction if we don’t tow the Establishment line that capitalism is the panacea to all society’s ills.

In the States we see the rise of Trump and his anti-immigrant rhetoric; neatly forgetting that any white American is far from native. The ‘black lives matter’ movement serves to remind us of the impending arrival of Manson’s Helter Skelter project fifty years behind schedule.

We are told that there are terrorists lurking on every street corner, radicalised far more by the right-wing media which then enforces this Western intolerance of their culture than by any mad mullah preaching hatred. Add to this mix a nation that believes it genuinely has a constitutional right to bear arms despite the fact that many of its residents have as many brain cells as a revolver has chambers.

The same nation that then weeps and wails and wonders why innocent children are being slaughtered when a pecker-dicked keyboard warrior has his programming activated, supposedly in response to the actions of the so-called terrorist.

The same nation that formerly believed it had a constitutional right to inject heroin and snort cocaine until the media convinced them that self-medicating was a bad thing in the early twentieth century. These self-medicaters then become criminalised and unemployable, meaning they have to rely on state hand-outs, whereupon they were deemed lazy scroungers by the self-same media that demonised them in the first place and the cycle of misery perpetuates.

We live in a world of celebrity in which we worship the vacuous and where we would wallow in our own excrement if a Kardashian endorsed it. It is time to lift our gaze up from the level of our smart-phones, remove our blinkers and to embrace the truth. It is time to realise that understanding what happened then is the key to appreciating what is happening now.

It is for these very reasons that events post WWII happened as they did.

It is time, then, to answer the remaining questions. Who was the Stripper Killer and why was Stephen Ward taken out?

One answer leads to the other: The Stripper victims were all Ward’s girls.

One answer leads to more questions:

Why would Ward kill himself when the worst he was looking at was a year or two in jail?

Why would Stephen Ward need to be guarded in his hospital room as he lay in a coma having consumed a lethal overdose of sleeping pills?

Why would someone want to kill an already dead man?

Could it be they just want to make sure that he never opened his mouth again?

If this was the case then Ward’s girls were in very grave danger after vouching that they would name names.

Christine Keeler and Mandy Rice-Davies had the powerful protection of notoriety, though the character assassinations performed upon them by the Fleet Street Establishment puppets ensured that the world would never take seriously anything those two had to say.
But the others were flung into the icy wind of abandonment and died within its cold embrace. Shot full of speed and stripped of all knowledge.

Let us consider their fate.

As previously discussed the first, in my opinion, Stripper Killer victim was 30 year-old Hannah Tailford, discovered in the Thames under a pier close to Hammersmith Bridge on February 2, 1964. Her underwear was stuffed in her mouth. Hannah was known on the pervy party scene and at Dolphin Square and had access to professional photographic equipment and developing services. Filed alongside her autopsy report was a map showing the Brick Lane area in the East End of London.
Irene Lockwood; a peroxide panther somewhat redolent to me of Myra Hindley, washed up on the banks of the Thames on April 8, 1964, not far from where Hannah Tailford had been found. Irene was another who was a fixture and fitting on the blue movie scene and, as already detailed, was well acquainted with the blackmail agenda.

On the 22nd of the same month Helene Barthelmy was discovered naked and dead in a back-alley in Brentford. She had last been seen alive at the Jazz Club at 207 Westbourne Park Road, a destination also well known to the next victim, Mary Fleming. Naked, strangled and minus some teeth, Helene of Blackpool was discovered with traces of paint upon her corpse. 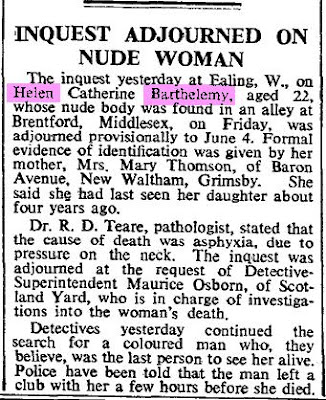 Similarly strange and unexpected paint spots were also present on Mary Fleming; found naked in July 1964 in Chiswick. Originally from Scotland, Fleming had been working the west London streets since 1955. 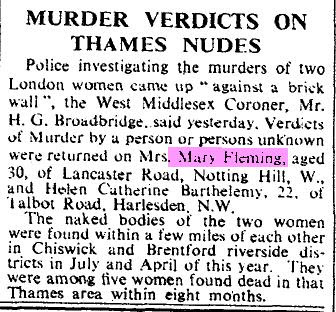 Next to die was Margaret McGowan, aka Frances Brown, who had bravely given evidence on behalf of Stephen Ward at his trial the year before. Her body was discovered on a pile of rubbish in a car park in Hornton Street, near to Kensington High Street. Again spots of paint covered her body and she was minus a tooth. She was also a Scottish girl; short dark hair, bit chubby but with nice boobs. She was the only one I knew. 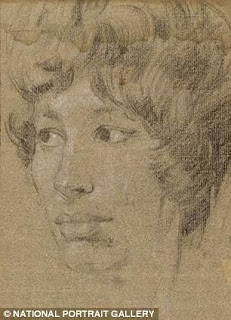 Irish-born Bridget O’Hara, also known as ‘Bridie’, was the last of Ward’s girls to die; her paint splattered corpse was discovered on February 16, 1965.

Recently, according to the Daily Mail, a portrait of a young woman involved in the Profumo affair was found on the back of a drawing of Christine Keeler; I can’t be certain but it does look a lot like Bridget O’Hara to me.

Bridget was found dead at the Heron Trading Estate in Acton behind a storage shed.
Once again, O’Hara’s body also turned up bearing flecks of industrial paint which were traced to a covered transformer just yards from where she had been discovered. She also showed signs of having been stored in a warm environment.

But, to get to the heart of this mystery we need to return to the Profumo affair and focus specifically on the downfall of Stephen Ward.