Hannah Tailford, who boasted of having attended a party in Eaton Square - where Lord Boothby lived - in which she was paid £25 to have sex with a man in a gorilla suit, was one who participated in this line of work before it got out of hand and she found herself cast as the star in her very own snuff-movie.

The author Brian McConnell in his expose of the Stripper murders Found Naked and Dead claims that police discovered that Hannah had access to a photographic studio and equipment; perfect for a would be blackmailer:

‘The blackmail theory was uppermost in the detective’s minds. For in their pursuit of her background they found an apartment she rented to entertain her clients. There were cameras, photographic lighting equipment, and an address book.’

Now I am no detective and I don’t want to blow my own strumpet but Hannah Tailford was a mere two-bob, street-walking harlot; there is no way she could have had either the means or the gumption to have set up a sophisticated extortion racket. Somebody was bankrolling this operation. Stephen Ward had the funds and Peter Rachman had the premises.

Likewise Margaret McGowan, aka Frances Brown; who, like the snapper Vasco Lazzolo, had given evidence in defence of Stephen Ward at his high profile trial in 1963, was another lady of the night who was quite happy to get the puppies out for a punter with a Box Brownie until she too fell victim to the Stripper Killer.


Indeed, young Margaret had once been pestered by the aforementioned Vasco Lazzolo, the society photographer and friend of Stephen Ward, to participate in a mucky picture shoot with another girl just weeks before her death. 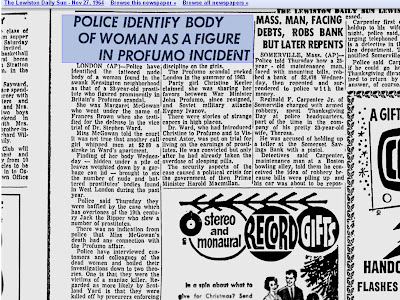 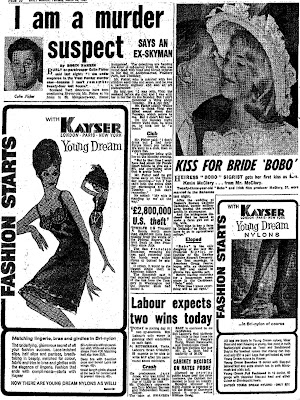 Yet another mucky muse cursed to die at the hands of the Stripper Killer was Irene Lockwood; only Irene was one who should really have known better given that her best friend Vicki Pender had only recently fallen foul of a customer with a violent temper. Vicki had made the cardinal error of trying to blackmail the client direct and had landed up strangled for her troubles; yet another dead brass on the streets, only not this time due to killer or killers unknown.

One thing both Vicki and Irene did know though was where to score those Purple Hearts. So did Hannah Tailford. They knew that the speed-freak trail led east to Brick Lane and to the lair of the twin faces of twentieth-century evil and to the self-same streets that had spawned the original ripper killer a century earlier.

So, Vicki, Irene and Hannah, the speed they peddled, the Kray twins and the spectre of the whore-hating serial-killer had all travelled the self-same, well-worn path from east to west London.

Vicki Pender; or Veronica Walsh as she had been christened by her ever-so proud parents, breathed her last gasp with the vice-like grip of an ex-paratrooper’s strong hands clamped around her throat.

Colin Welt Fisher was that former paratrooper, but was, by then a 33 year old civilian salesman/engineer/art-photographer. Colin had turned to Vicki for her own strong grip technique, though she had, in an amphetamine flash, found that the boot was on the other foot and that things were going spectacularly tits-up very rapidly.

After a 48-hour speed and hash fuelled bender the prosecution claimed Fisher, at a time unknown, had strangled the bejesus out of Vicki before running off to the Daily Mirror with a story to sell. The compassionate newspaper informed Colin that his tale was only of interest to its readership, and, therefore, lucrative for Colin, if he coughed for the murder charge. Clever Colin quickly worked out that dirty money was no good to a man dangling from the end a rope and so decided to keep schtum. A wise move given that the paper was feeding back everything Colin told them to the Old Bill. The Daily Mirror, despite assurances, never did reveal what Colin had told them, which given Colin’s defence had been memory loss, may, or may-not be revealing. 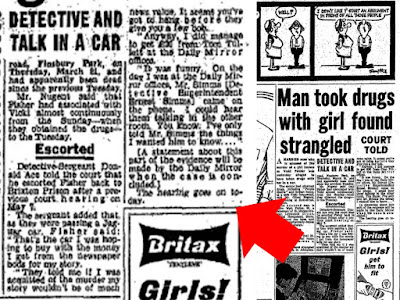 However, Colin was also using his photographic expertise to carve out a niche business in the under-the-counter group-sex photographs racket for which both Vicki and Irene were particularly game. After all, it is infinitely more rewarding to pose with your pal and a strap-on dildo in a nice warm, anonymous room than to lay with your knickers around your ankles in the back of an old Ford Zephyr whilst being impaled by a beer-breathed navvy!
Vicki’s pal, Irene Lockwood, had also developed a neat side-line which involved mugging punters by luring them to a flea-pit hotel room before doing the off with their rapidly dropped trousers and wallets, safe in the knowledge that they were highly unlikely to go running to the law.

That is, of course, before the Stripper Killer added Irene to his expanding roll-call of victims.

So by 1964, and with Peter Rachman, Stephen Ward and the street girls all silenced, Mary Ann de Grimston quickly spotted the gap in the market. Mary could bring with her an ever-growing list of willing devotees who, by dint of the Scientologist auditing process, will have provided a full and frank admission of any and all sexual peccadillos and perversions. Plus there was the additional benefit of being able to add a touch of class and breeding to the cinematic proceedings. Hookers are all well and good but, let’s be honest, you’re just not going to add that hint of English rose, a frisson of virtue or a soupçon of purity to your celluloid masterpiece by using a rough-as-arseholes tart with ‘Mum and Dad’ tattooed on her forearm. Casting is everything after all.

Also, with snuff-movies being what they are there is an ever changing cast-list and landing the coveted lead role is somewhat of a poisoned chalice. If you were selected for that plum position the only thing you could be certain of was that you would give the performance of your life.

You see these girls: the Hammersmith nudes, the Thames torsos, the prey of Jack the Stripper, they weren’t the poor victims of a punter with the pox; they were silenced because of what they knew and who they knew.

Rachman had seen the writing on the wall and had faked his death, but Stephen Ward made the fatal mistake of believing that his friends in high places would save him. Of course once he no longer had direct control over his portfolio of pornography then he was a dead man walking.

L. Ron Hubbard Jr. was wrong about having had Ward by the balls though. Hubbard and his Process allies knew only too well the power that incriminating materials can buy you, but they bought right into the Cold War bullshit and thought that they could play the Americans and the British off against the Russians. But it didn’t work like that, that’s not where the real power lay.