Gale Ann Benson was the privately educated, trust-fund financed and generally over privileged daughter of the one-time Tory MP for Chatham in Kent, Captain Leonard Plugge. Plugge was an interesting character who had created the International Broadcasting Company in 1931 as a commercial rival to the BBC. Plugge loved to travel around Europe and moved in a social circle that included the likes of Princess Margaret. Through these highfalutin circles Gale met, in the late sixties, an American who called himself Hakim Jamal, although, in reality, his real name was the far less glamorous Alan Donaldson, who hailed from Boston in the US and who was a cousin of the Black civil rights protestor Malcolm X.

Hakim came to London and managed to bag himself a pair of X’s when he ingratiated himself into the circle of Peter Rachman’s former henchman, turned UK Black Power activist, Michael X. Michael X, born Michael de Freitas in Trinidad, had resettled in Britain and developed a career as a drug dealer, pimp and all-round heavy; indeed he titled himself the ‘archbishop of violence’. To this considerable bow he added a side-line as a political and civil-rights activist and, as a result, found himself being lauded by the liberal, white, middle-class hippie intelligentsia that infested west London at that time with their kaftans, mung beans and altogether overbearing pretentiousness.

Gale Ann Benson was very much a part of this set and her life would be changed completely when she encountered Hakim Jamal at a dinner party at the house of the actress Vanessa Redgrave.

Despite her ignorance of black culture – “He was the first black man I had ever really talked to.” -  she probably thought she had met a kindred spirit when Hakim, like her darling Daddy, boasted of attending functions alongside Princess Margaret, and her then husband Lord Snowdon, as well as the broadcaster David Frost.

Hakim had written a book about Malcolm X for which a launch party was held at the flat of his publisher, Diana Athill. It was here that Gale’s brother Frank witnessed the bizarre hold Hakim seemed to possess over his sibling:

“But what I found really odd was the strange act Hakim did with Gale. He laid her across two chairs, head on one, legs on another, and as I watched, she seemed to go into a sort of coma. She was quivering - and she wasn’t acting. Hakim said that being able to do this was proof that he was God” said Frank.

By 1971 the infatuated Gale was living in a ‘Mansonesque’ commune in Trinidad with Hakim and Michael X’s cronies – X being now on the run from Britain after he and four colleagues were arrested for extortion – when, on January 2, 1972, she came across Michael and his pals digging a hole in the ground. After innocently pondering its purpose she was told that “this is a fresh hole for decomposed bodies” before being set upon by two men armed with cutlasses and buried alive; it was her own grave!

Within a month Hakim had fled the island, despite his partner still being officially listed as missing, with funds supplied by Michael X and claiming that he had grown tired of the “clingy” Benson; this being despite her persistent efforts to raise funds on behalf of his pet projects. Back home in Boston Hakim would then regale the British press with lurid stories of a Black Magic New Year’s Eve party held at the commune immediately prior to Gale’s death. Hakim recalled how he had seen Michael X slit a cow’s throat and drink its blood, the sight of which had made him nearly throw up. A natural reaction perhaps, but hardly Godlike!

God’s memory then seriously starts to betray him as he recounts that a few days later he was haunted by a “sense of evil” and that this prompted him to take Gale to Port of Spain in an attempt to sell a diamond-less diamond ring in order that they could raise the funds to get Gale out of Trinidad. They failed.

Now you don’t need to be Sherlock Holmes to realise that Gale did not have a few days to raise funds; she was dead within 36 hours of the blood drinking incident, so was Hakim attempting to cover his own tracks or had Michael X really summoned Satan to battle God?

If he did, it was the devil what won man.

Vengeance was swift however, as a little over a year later God’s divinity and omnipotence were exposed for the shams they were when a black hit-squad burst into Hakim’s apartment and kindly redecorated his walls with the addition of Jackson Pollockesque splatters in a fetching shade of claret. God is dead as Friedrich Nietzsche had predicted some one hundred years earlier. 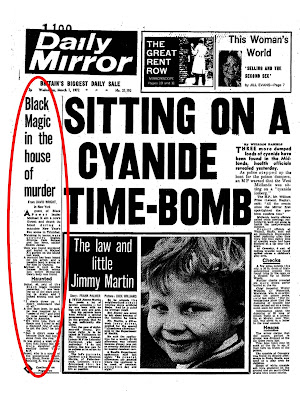 As for Michael X: well the archbishop of violence was defrocked in 1975 when, like Ruth Ellis, he also felt the coarse retribution of the hangman’s noose; not for Gale’s murder but that of a barber named Joseph Skerrit who was discovered, like Gale, pushing up the daisies beneath Michael X’s vegetable patch.

Skerritt was a member of Michael X’s ‘Black Liberation Army’ and had been killed by him because he refused to obey orders to attack a local police station.

But why kill Gale?

In the plot of a 2008 film, The Bank Job, it is claimed that she was working deep undercover for the secret services as part of their campaign to infiltrate the Black Power movement. Now this may not be as ridiculous as it first seems. Gale’s father had been rumoured to have been an MI5 operative and one of Hakim’s former lovers, Jean Seberg, had been the victim of an FBI COINTELPRO plot that maliciously suggested that she had become pregnant by a black man during an extra-marital affair. This was not true, but it was her payback from the, so-called, greatest democracy on Earth for having previously donated money to the American Black Panther Party. So it seems clear that there was governmental concern on both sides of the Atlantic over the growing rise of black civil-rights activists. 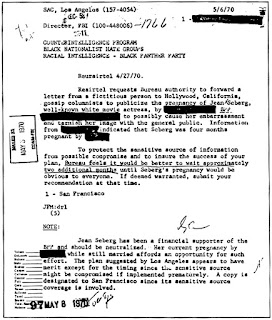 Seberg, incidentally, would become another member of the sleeping pill ‘suicide’ club!

According to the film Michael X was using a set of sexually incriminating photographs of Princess Margaret, taken in Mustique, to try to blackmail the British Establishment. Does this sound at all familiar?
The photos reportedly detail a sexual liaison between two West Indian men and Princess Margaret.

These pictures were then stored in a bank vault in London, from where they were, supposedly, recovered in a sophisticated undercover raid in 1971 by the intelligence services in what has become known as the Baker Street robbery.

The fact that the bank was literally a stones-throw from where Stephen Ward lived should, by now, alert you as to his, at least peripheral, involvement. Of course by the time of the robbery he was long dead – Ward, indeed, did not have a bank account himself - and the responsibility for the security of the illicit photographs had been left to Michael X.

Gale, it is claimed, had been secreted into an undercover role to establish whether any other photos or negatives might be found at Michael X’s home. In the book Michael X by John L. Williams the author claims that X had discovered Gale nosing around the contents of his desk three times, however, if the authorities had secured the offending photos in 1971 via the Baker Street robbery then why hadn’t Gale been extracted? There must be more to this.

Likewise if Michael X suspected Gale’s motives, as it appears he did, why did he not ask Hakim to use his ‘Godlike influence’ over Gale to reveal her mission, or, failing that, to force her to fuck off?

No, it is far more likely that Benson was stubbed-out because of what she knew and that Michael X decided he simply could no longer risk her continued existence.

I have no doubt that mucky pictures of Princess Margaret do, or did, exist. She was, after all, as partial to a phallus as she was a drink and there have been long-held rumours of the existence of photographs of an inter-racial, inter-sexual liaison on Mustique; not to mention her fondness for the villain John Bindon and his extraordinary member! Let us not forget also that one frequent visitor to the island was her cousin, the famous photographer, Lord Lichfield, who may have captured God only knows what on his trusty Nikon.

We cannot, however, simply assume that Princess Margaret was the star of these photos. There are plenty of other royal candidates; not the least of whom being her brother-in-law, who may well have also been caught in flagrante delicto by the erect zoom-lens of a concealed paparazzo. As such, we shall return to the Baker Street Robbery in greater detail in due course.