Brenda Dean and Brenda Duggleby were, in fact, one and the same person and she was a RADA trained actress who in April 1965 changed her name to Brenda De Wolfe. 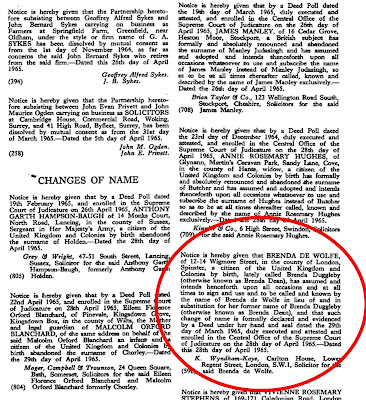 And who, in 1967, did wed the exotically monikered Earl F S de Wolfe.

Brenda died in 1998 so the opportunity to ask this question has long gone, but why should it be necessary for her to adopt the de Wolfe name two years prior to legally assuming it through marriage, was it purely to keep up appearances? 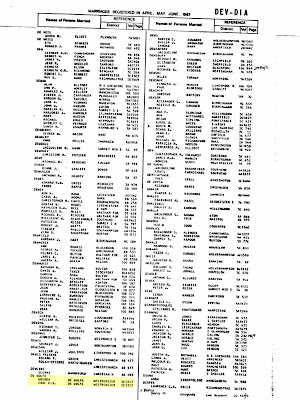 There is little information available on Brenda Duggleby Dean de Wolfe other than she was an actress who had spent some time in the United States.

Well, when L. Ron Hubbard Jr. finally escaped the old family exploitation business he changed his name to Ronald Edward DeWolf! Is this just a coincidence?
DeWolf, it appears is a name from the old Mother Hubbard family lineage. 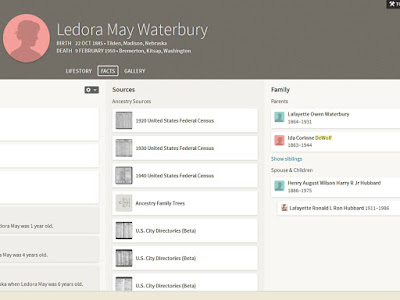 My first thought was that Earl de Wolfe was a pseudonym for old L. Ron Hubbard himself, but sadly, this is not the case. Earl is actually one Earl Felix Sylvester de Wolfe, commonly known as Felix, and who was born in 1914, died in 2007, and was keen on a wedding. He was also a theatrical agent of some standing within the acting community, which would explain his penchant for marrying actresses and may provide a clue as to how exactly Stephen Ward was able to acquire so many movie bit-parts for his girls. Amongst his clients were vintage British TV stalwarts Thora Hird, Deryck Guyler, Hattie Jacques and, more recently, Robert Lindsay. Another client of de Wolfe’s was the Hollywood actor Roddy McDowall whom he had represented since 1945. This is, in itself, interesting as Felix was supposedly still serving in the RAF until 1946! 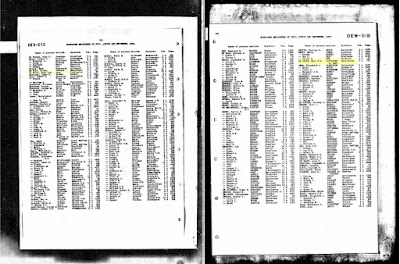 De Wolfe, as can be gleaned from a 1960 newspaper account, was a former RAF man.

The article above is fascinating for the story it tells of the mental health of de Wolfe’s first wife, Gabrielle. We discover how his wife, in a failed suicide attempt, accidentally gassed their young child to death: an incident for which Gabrielle would be tried for murder.

Gabrielle was declared insane and sent to Broadmoor, rather than the gallows, where she underwent a lobotomy despite only suffering from, initially at any rate, a condition that would now be diagnosed as a form of OCD. Gabrielle would die in 1986, though if she was still institutionalised at the time is unclear.

One wonders if her mental problems were brought on because she had received some sort of mind-control conditioning. Felix, being a theatrical agent, would have been in an ideal position to provide vulnerable women with four of the nine subconscious desires mind-control programmers are said to tap into in order to produce loyalty, namely; ego-gratification, a creative outlet, a sense of personal power and a reassurance of worth.

Despite Gabrielle’s fragile condition it is telling that she still wished to pursue a divorce on the grounds of her husband’s infidelity – in the event it was granted in her husband’s favour on the grounds of her mental condition. All of which was presumably highly convenient for the charming de Wolfe as within a matter of months he was married again.

Wife number two was Catherine Lancaster, aka Florence May Shaw, an actress who apparently starred in the original stage version of Oliver. Another interesting newspaper article – in which Catherine knocks ten years off her age, though which, sadly, did not scan too well – tells a tale of how, by 1963, dear Felix has blown her out too for a younger model.

Wife number three was another actress, the aforementioned; Brenda Duggleby, aka Dean. 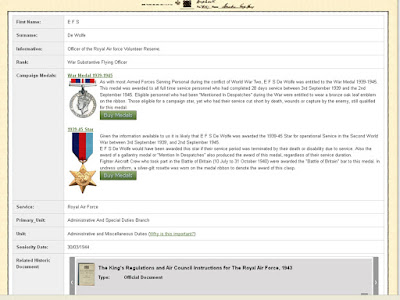 What we can see is that de Wolfe was in the Administrative and Special Duties Branch, which is military code for intelligence work!

I have copied this potted history of the Administrative and Special Duties Branch direct from Wikipedia;

Now, there is nothing inherently suspicious about having worked in intelligence, particularly at a time of war, however, it would have provided a most useful educational tool for life once back in civvy-street.

Two other prominent former members of RAF intelligence were Sarah Churchill (daughter of Winston and wife of Anthony Beauchamp) and the actor Michael Bentine, both of whom were associated with Stephen Ward.

As we have already seen the official Process timeline states that the de Grimstons moved into Wigmore Street in 1964, whilst the other source states it was 1963, however, the electoral register shows no sign of them residing with the de Wolfe’s in either year.

There is, coincidentally, a Robert S Moor living just round the corner from de Wolfe, on Wimpole Street, in 1964 but is that the same guy that, with Mary Ann, moves in with de Wolfe?

Could Felix de Wolfe have been a relative of some English line of the Hubbard pedigree? Certainly Hubbard claimed an English descent via one Count de Loupe (loup being the French word for wolf), who, supposedly, took part in the Norman invasion of England in 1066. This family has intriguing connections with the Knights Templar and the Rennes-le-Chateau mysteries, and, indeed, with very ancient Arcadian wolf cults. The said Count then went on to found the English de Wolfe family so, at the very least, this claimed English heritage is plausible. Furthermore, de Wolfe is not a particularly common name in the UK; Ancestry.co.uk estimates that only two such named families reside in Britain today, which would surely serve to strengthen any claims of a shared ancestry.

Could the theatrical agent Felix de Wolfe have been finding bit-parts for some of Stephen Ward’s girls like Ruth Ellis?

Could the theatrical agent Felix de Wolfe have been lining up starring roles for aspiring actresses/good-time-girls for occult initiation based snuff-movies? Aspiring actresses recruited from the pavements of London by the street-walking, Alsatian toting disciples of the de Grimstons? Girls that were needed to fill the void left by the inopportune death of the previous purveyor of popsies, Stephen Ward, when he joined the not-so-exclusive cast of the great sleeping pill suicide club? Snuff-movies that could have found a route to their niche, perverted marketplace via the fledgling Processean Hugh Mountain and his Granada TV owning father?

Two and two may be adding up to five here but Hubbard, like Felix de Wolfe, Stephen Ward and Lord Astor, was a former military intelligence officer. Hubbard also had a history of multiple marriages to women with mental health issues. By the sixties Hubbard was living in the UK in a mansion in East Grinstead - near where I used to go with Ward when he visited his Battle of Britain burns victims – called St. Hill Manor that had been bought with Russian Roubles paid in return for information received.

The swanky Marylebone apartment with the de Wolfe’s seems to have been set up on a plate for the Processean’s and, apparently, provided the perfect location for the Process Church to operate as an unofficial Scientology splinter group.

And given that Mary was not only a trained Scientologist auditor but also an experienced prostitute then the potential for extracting money/information/confessions out of customer’s, and/or, Process members increased exponentially.

And therein lay the heart of the operation. Mary Ann MacLean was a known prostitute with connections to Stephen Ward, who, in turn, knew Peter Rachman who specialised in leasing rooms to whores. Both these men attended sex parties at the home of Diana Dors and her husband Dennis Hamilton and he had developed a unique voyeuristic side-line utilising two-way mirrors and concealed cameras. A side-line quickly adopted by Ward and Rachman for blackmail purposes.

After the 1959 Street Offences Act had cleared the ladies of the night off the pavements Mary could have utilised a swanky Marylebone apartment for any number of uses: as a venue for good old-fashioned whoring; as a venue for photo-shoots and kinky parties; or, as a venue for their peculiar brand of brainwashing, as they freely admit in their official literature.

We should remember also that Mary Ann MacLean / de Grimston would have been vulnerable for exploitation on two fronts. Firstly, as she had been one of Ward’s girls operating out of Murray’s Cabaret Club then Ward would have had blackmail materials on her. Equally, having gone through the Scientologist’s auditing programme, they too would have had a dodgy dossier detailing all her kinks and perversions. One wonders if the delay in the de Grimston’s expulsion from Scientology was because she had possessed the foresight to use their blackmail techniques against them. What did she have on them? Did they really bug her auditing sessions, and if so, why? Alternatively, could she have been a plant? Could she have used her connections with Stephen Ward et al to keep the Scientology heavies at bay?

Whatever the truth Mary was certainly using ‘Compulsions Analysis’ to build up blackmail files on all the gormless and wealthy Establishment offspring that tripped over themselves to sign up to the Process cause. Most likely some of the high-class totty that entered Mary’s orbit was put to use in the same way the street girls were; to be the entertainment on the pervy-party circuit. The plan was a simple one: make sure that not all the cameras were pointed at the girls.