As I said above I knew Mariella Novotny, I dated her for a short while, telling her I’d be there any time she wanted kids. She told me the identity of the ‘man in the mask’; she used to regularly whip him, handcuffs an’ all!

Mariella always called the ‘man in the mask’ party the feast of peacocks after what had been served for dinner.  This was in December 1961 and the party would only later become famous when Mandy revealed that when she arrived the door had been opened by Ward wearing just a pair of socks!

Mariella spent most her time that night in bed wearing a corset, a whip and six men! The rest of the guest list - actors, MP’s and judges – was pure A-list and they were all naked except for a man wearing a mask and a Masonic apron who was tied between two pillars – appropriately - and who was whipped by everybody upon entrance. Numerous names have been bandied about as to the identity of this man and Mariella knew the real story.

I think her ‘little black book’ got her killed. In 1978 she announced that she had started writing her memoirs and that these would include details of her work for MI5. Later she claimed that her book would include accounts of her time in the US and revelations concerning JFK. The book never appeared. Mariella Novotny was found dead in her bed in February 1983 after, yet another, drug overdose. Shortly after death her home was ‘burgled’ and any and all incriminating evidence disappeared.

Mariella had been married to a guy called Horace ‘Hod’ Dibben who was some 36 years older than she was. Horace was an antiques dealer (as was Mariella; on their wedding day this antique gave her a mansion and a flat in Eaton Place in Belgravia!) and a nightclub owner.

Horrible Horace was the former owner of Esmeralda’s Barn in Knightsbridge; a venue which has already played a minor role in our story but which deserves greater consideration.

Popular legend has it that the Kray’s acquired the Barn from Peter Rachman but Esmeralda’s was, in fact, owned by a guy called Stefan de Faye, though Rachman may well have been a shareholder.

More likely is a tale that word had spread east that Rachman had a good thing going on in the Notting Hill slums and that the twins were itching for a slice of the action. Rachman, who already had a steady supply of comedy henchmen, knew that if he started paying protection money he would never stop, so he, and Billy Hill, tipped off the Krays about Esmeralda’s and its success.

For Rachman this may have also helped to clear a debt. There is a story that Rachman had acquired a gambling debt at Esmeralda’s and that Ronnie Kray chased him for it. Rachman gave Ronnie some cash towards it and a cheque for the rest, which bounced. Bad idea.
It then appears that the club, as well as being a casino, became a venue for gay sex and a criminal information network run by David Litvinoff.

Litvinoff, whose legend was built around his plastic gangster status, was another who had accumulated gambling debts at Esmeralda’s; three grand in Litvinoff’s case, and Ronnie Kray used this debt as leverage to acquire the lease on a flat in Ashburn Gardens in Kensington that Litvinoff owned; provided Litvinoff threw in his live-in lover Bobby Buckley as well. This extremely un-holy trinity then apparently occupied the flat in the smart west London neighbourhood for the next 18 months.

Litvinoff would become the link between the criminal fraternity and the society movers and shakers and seems to have been a player in the emerging CIA controlled LSD market.

He was also, like Stephen Ward, a procurer of popsies and it was in this function that he supplied girls for the parties that the actress Diana Dors and her husband Dennis Hamilton would host at their house in Maidenhead. These proceedings would then be filmed, via a two-way mirror installed in the ceiling in a similar manner to the OSS installed system at Ward’s house. These ‘home-movies’ would then be sold by Hamilton to his cronies on the sicko scene in rather the same fashion as Roman Polanski was rumoured to be doing on the sixties Hollywood circuit.

When Diana tired of this licentiousness and split with Hamilton the ever generous Rachman would purchase the two way mirror for installation in one of his own properties, presumably to continue the illicit film-making programme and to broaden the burgeoning blackmail portfolio.

Whilst the Profumo affair was unsurprisingly headline news in the UK, toppling a Tory government no less, the level of attention and scrutiny the case received over the pond was a matter of great concern.

You might think that the Americans would have been relatively unconcerned about the sexual deviancies of their British colleagues, but this was far from the case, and with good reason. 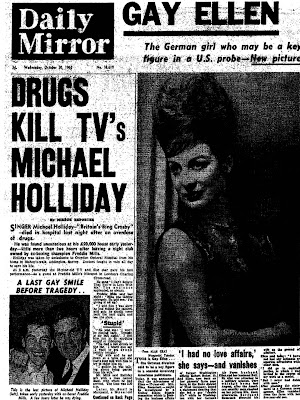 It is one of life’s true coincidences that on the very day that Fleet Street should be devouring the circumstances of the death of Michael Holliday; an earlier vignette along our time-travelling explorations, that it should also feature a front-page picture of ‘Gay’ Ellen Rometsch.

Now there’s a name with which to conjure.

It is testament to the great many changes of the past half century that ‘Gay Ellen’ did not mean that Ellen was gay: no, that would really have caused some conservative American consternation. ‘Gay Ellen’ then, meant that Ellen was gay; i.e. she liked a gay time; or, in other words that she was a whore, only they couldn’t say she was a whore due to the nature of her whoring which involved being balled by a Kennedy. Oh, and she was East German; which nowadays means that you are just another citizen of the fourth Reich, sorry, European Union, but back then that made you a communist, in American eyes anyway, and, therefore, a spy.

So, in the public perception, not only was ‘Gay Ellen’ a foreign, red, slag but she was also receiving pillow-talk from the President himself.

J. Edgar Hoover must have been shitting his pants!

Worse yet, ‘Gay Ellen’ was not the only foreign, red, slag that was receiving special Presidential attention; a girl called Suzy Chang was also being mentioned in dispatches as was my friend Mariella Novotny! Happy birthday Mr President indeed!

Oh, and Bobby Kennedy was knobbing them both as well; but then he was well used to sloppy seconds!

And therein lay the root of the great American fear; had Ward’s girls penetrated defences on both sides of the Atlantic? Did their legs spread so wide that they could consume an engorged ocean?

Certainly Ward’s girls were operating the same tricks for him as they were for Bobby Baker and his harlot’s harem of quim at the Quorum Club on Capitol Hill (Gosh, that’s a mouthful said the actress to the Bishop!).

The Quorum Club was another place that was used to acquire information about politicians that could later be used for blackmail, as was the house that Baker bought, ostensibly for his secretary, but from where he ran sex parties. This was a particularly useful asset for Lyndon B. Johnson who found it fairly easy to get politicians to do whatever he wanted should they have previously attended one of Baker’s pervy parties.

Bobby Baker was asked if he would arrange a meeting between Ellen Rometsch and John F. Kennedy. Baker later said that:

“He (Kennedy) sent back word it was the best time he ever had in his life. That was not the only time. She saw him on other occasions. It went on for a while.”

Baker then told LBJ and Hoover about Kennedy’s relationship with Ellen Rometsch. In July 1963 Federal Bureau of Investigation agents questioned Romesch about her past. They came to the conclusion that she was probably a Soviet spy.